A while back, ok about 2 years ago I developed the local government starter kit for Umbraco. A starter kit is just a different type of package that builds a whole website rather than just adding a specific feature. 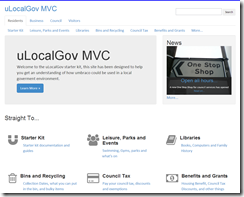 When I developed the first starter kit it was as much as a learning exercise for myself, getting to understand Umbraco, how packages worked and how building a whole local government site in it might work.

An almost but not completely unlike local government site 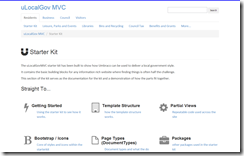 The aim of the starter kit it to give you an idea of what a local government website might look like if you where to implement it in Umbraco.

Now while this starter kit is a complete from-the-ground-up build of a local government site, given that both Marc and myself worked on the Liverpool site, it’s not shocking to see that the final outcome isn’t a million miles away from that in style and structure.

There are a lot of elements to the starter kit that go into making the site, and the best place to read about them is inside the kit itself, we have included a starter kit section that has all the documentation about the various bits and how they work, but it does include 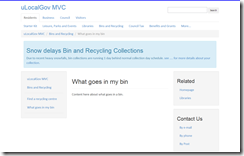 Like the first time I build the starter kit I wanted to use the time as an opportunity to try new things and learn a bit more; so as well as developing the solution in mvc as opposed to more traditional .net web forms, I also did lost of co-development with Marc Goodson via GitHub. this has been really interesting not least because I’ve had the opportunity to use uSync and uSync.ContentEdition in anger, something I will probably talk about soon.

As well as working with all the new shiny bits of Umbraco and GitHub one thing both marc and myself are very keen on with this version of the starter kit is that it is completely open for other people to contribute.

We are very aware that we are coming at this from one distinct direction, and we feel that there can only be benefit from people from other backgrounds contribute and add to the diversity of the package, you can browse and download all the source on GitHub, so why not get forking?