It’s always 2:30 in the morning, when I decide it’s time to start a new blog.

It’s usually about 10 in the morning when I decide it was a stupid idea, but at the moment it’s 2:30 so lets humour me for a few minutes, and actually work out what this is going to be all about. 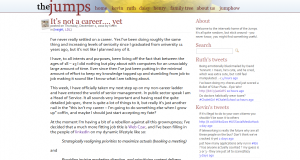 Well I have a blog (http://thejumps.co.uk) I’ve had it for over 9 years now, which makes it quite an old blog. Recently however and by recently I mean the last 2-3 years, I’ve been finding it harder and harder to actually write anything on that blog; Partly because I’ve been quite busy, Partly because I can tell the world what’s in my brain in 140 characters on twitter now and partly because I increasingly want to vent some of my nerdyness on to the blog, and it just doesn’t feel right there.

I know what you’re thinking, or more precisely I know what I am projecting onto you “who needs another badly written nerdy blog?” well put like that no one. So I best do something else.

What I intend to do is ramble and rant my way around things that I think about as I go about my day which is filled quite a lot by being the head of web at one of those public private partnership things with the council.

Now you are right that’s not really adding to the sum of human knowledge either, and it looks like we are reaching the 10am moment quite a lot sooner than we planned.

Well you have forgotten one key fact that motivates all bloggers. I don’t care what you think, and If I put my fingers in my ears for just long enough I can pretend that what I have to say will be useful.