Telling people things are the same is often as important as telling them they have changed, something Liverpool city council noticed recently, when they failed to adequately convey that Bank Holidays no longer changed collection dates for residents.

The site has quite a large amount of page furniture, in the large headings and very prominent A-Z, but it does dedicate a lot of the homepage to the services and information people will most likely want from the site. 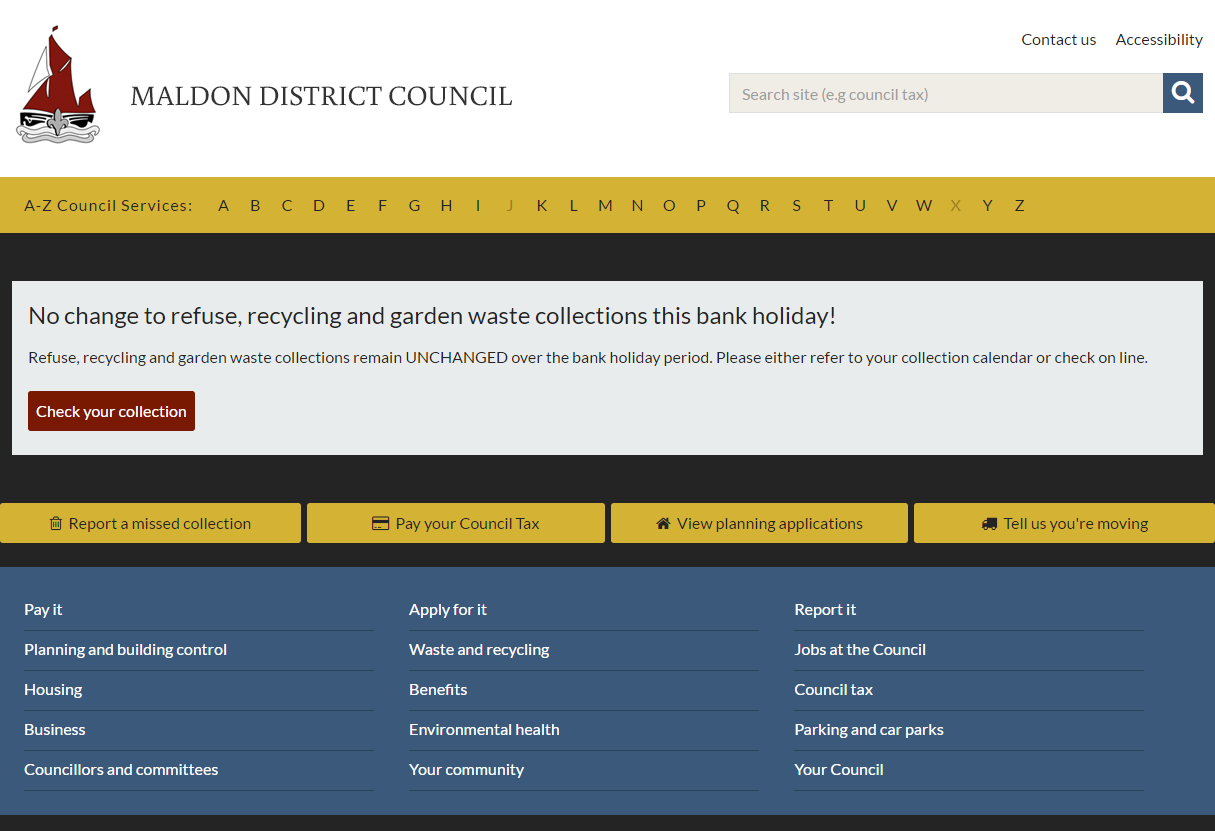 The mixture of verb and noun navigation is a little confusing on the homepage. The “Pay it”, “Apply for it” and “Report it” navigation elements look like headings for what is beneath, but aren’t. On investigation, this turns out to be because those phrases represent actions, when the rest of the navigation is just a collection of descriptive nouns. On subsequent pages, though, the navigation is clear and well grouped. I am sometimes a little wary of link overload on pages where there are just lists of one and two word links, but I think Maldon get away with it, here, and it works reasonably well.

Pay it, Apply for it, Report it feel like headings

Structurally, there are a few oddities in the site. I would have never considered cemeteries and memorials as part of “Your Community” (although this may be a philosophical question!), and this site had me reaching for my handy Local Government Association guide as to what councils do what, just to confirm that leisure is, in fact, a responsibility of district councils.

I keep on saying this, but it’s one thing to devolve services out to third parties, but you still need to signpost people to them. There is no navigational evidence of leisure services on this site - a search reveals entries in the A-Z, but that is it.

We’re not doing in-depth usability testing on sites (though if you’d like us to, do get in touch!) but we’ve had a quick go at achieving some common, often high-volume, user tasks.

The site looks to offer look-ups, to allow people to find their bin collections, but at the time of our testing, this was broken.

While libraries are not a service delivered by district councils, it is still important that services delivered at the county level are at least signposted. The lack of any reference to libraries or leisure on this site make it very hard to see what nice things you can do in Maldon.

The site has a clear design and site-wide alerts have been used to good effect. The heavy reliance on the A-Z can sometimes make finding what you want a hunt-and-peck exercise, with varying levels of success and failure even for the most basic of information. A lack of clear links between the district and the county really show, as soon as you veer away from the core of the services this council provides.

Also worth noting is the smoothness of integration with products such as Achieve Forms. Many sites struggle with this, but Maldon have successfully made it work well, to the advantage of the end user.